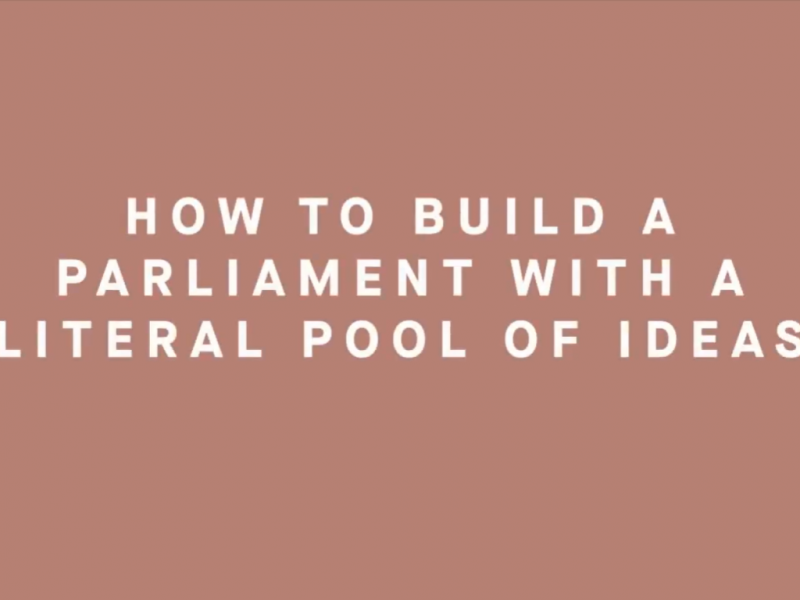 Coronet Inside Out: Ibrahim Mahama

Ibrahim Mahama, one of the most exciting artists to emerge from Ghana in recent years, continues his exploration of his country’s half-forgotten past, its journey from British colony to independent nation completed barely 60 years ago in The Parliament of Ghosts, a new film, directed by Mahama as the latest iteration of this ongoing project.

Mahama opened the Savannah Centre for Contemporary Art in his home-town of Tamale in Ghana this year, providing an artist-run project space, exhibition and research hub, cultural repository and artists’ residency, built by his father, a building contractor. Originally conceived for Manchester International Festival and shown at the Whitworth Gallery in Manchester, the film documents the construction of The Parliament of Ghosts on site at the new Centre, which he hopes will become permanent in Tamale.

How to build a parliament with a literal pool of ideas

“How do we resurrect ghosts within a time of crisis? What do ghosts and crisis have in common? Can failed revolutions lead us to think of crisis as a form of material to create new forms within the 21stcentury? What does the gift economy and crisis have in common? Is it possible to imagine a future using death and decay as a starting point? What constitutes a parliament or a place of gathering? Are ghosts implied within historical places of gathering? What is a constitution of labour and its ideological implications?

The Parliament of Ghosts is a place of many gatherings using the failures of history as a starting point of artistic production. The process of building a place starts with an assembly of various labour forms and techniques, it is the constitution of labour that defines any given form. These labour forms have produced many ghosts across time and it is important to allow them to shape the ideas and embodiment of place. The haunting of place and the constitution of labour might lead us to rethink about the role of capital and its paradoxes.

The constitution of labour is at the center of the universe and it has no limits, for it is important to pay attention to the gift economy with these uncertain and difficult times so the generations which emerge from the crisis can create new values and systems not just based on circulation of capital but through an act of will. The introduction of play into the place of gatherings might yet be the next revolution with this century?” – Ibrahim Mahama

One of the most exciting artists to emerge from Ghana in recent years, Ibrahim Mahama uses the transformation of materials to explore themes of commodity, migration, globalization and economic exchange.

After receiving an MFA in Painting from the Kwame Nkrumah University of Science and Technology, Kumasi, in 2013, Mahama quickly achieved international acclaim for his large-scale installations. Often made in collaboration with others, these installations use materials salvaged from urban environments, such as remnants of wood, or jute sacks that are stitched together and draped over architectural structures.

Mahama’s interest in material, process, and audience first led him to focus on jute sacks that are synonymous with the trade markets of Ghana where he lives and works. Fabricated in South East Asia, the sacks are imported by the Ghana Cocoa Boards to transport cocoa beans and eventually end up as multi-functional objects, used for the transportation of food, charcoal and other commodities.

Mahama’s work has been presented in numerous international exhibitions, including Documenta 14, Athens and Kassel (2017); An Age of Our Own Making, Kunsthal Charlottenborg, Copenhagen and Holbæk (2016); Fracture, Tel Aviv Art Museum, Israel (2016); All the World’s Futures, 56th Venice Biennale, Venice (2015); Artist’s Rooms, K21, Dusseldorf (2015); and Material Effects, The Broad Art Museum, Michigan (2015) and most recently at the 58th Venice Biennale (2019) as one of the artists in the acclaimed Ghana Pavilion and 22nd Sydney Biennale.