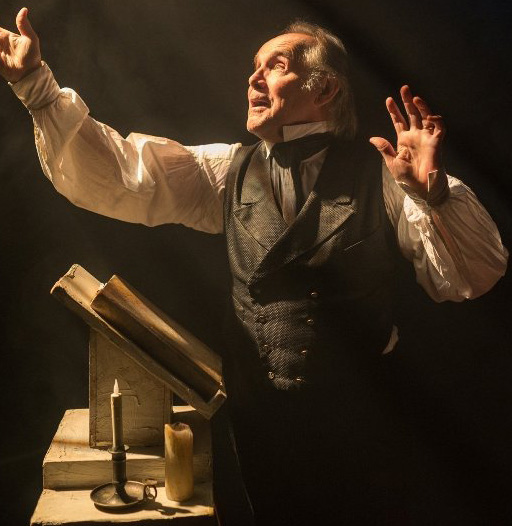 Actor Clive Francis brings his acclaimed adaptation of the Charles Dickens classic, playing the misanthropic Ebeneezer Scrooge in this delightful one-man show for family audiences.
Inspired by Dickens’ first reading and performance of A Christmas Carol on 30th December 1853 at the Birmingham Town Hall, Clive Francis re-enacts this festive masterpiece with words penned by Dickens, while playing every notable character from the original, haunting story.

Clive Francis is a writer, actor and caricaturist. For the stage, his adaptations include A Christmas Carol, The Lavender Hill Mob, Three Men in a Boat, The Hound of the Baskervilles, Our Man in Havana, The Loved One and Alice the Musical! As an actor, he has appeared in several seasons for Chichester, the National Theatre and the RSC and since 1966 has appeared in over twenty West End plays including The Servant of Two Masters, The Circle, The School of Scandal, The Importance of Being Earnest, What the Butler Saw, An Absolute Turkey, Entertaining Mr Sloane, Enron and The Madness of George III at the Apollo Theatre. For television, his credits include David Copperfield, Entertaining My Sloane, Poldark, The Critic, The Far Pavilions, Yes, Prime Minster, Oedipus at Colonus, The Rear Column, Quartermaine’s Terms, The Piglet Files, Lipstick on Your Collar, The 10%ers, Longitude, Pierrepoint, New Tricks and The Queen; and for film, his credits include Mike Leigh’s recent film, Mr. Turner.