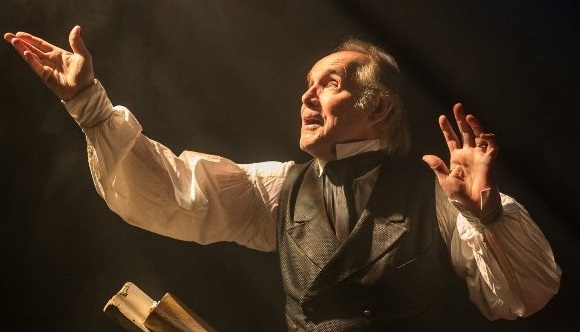 Adapted and Performed by:
Clive Francis

Celebrated actor Clive Francis brings his spellbinding performance to the Victorian setting of the Coronet.

★★★★ “Touches the heart”- The Independent
★★★★ “Spellbinding!”- The Sunday Times
★★★★ “Performance of his career”- Daily Telegraph

The enduringly popular A Christmas Carol by Charles Dickens is one of his best-loved novels. It tells the story of the stingy Scrooge and his transformation one Christmas Eve as a result of the ghostly visits of his deceased business partner, as well as the Ghosts of Christmas Past, Present and Yet to Come.

Clive Francis  is a veteran of over 20 West End plays and a 100 television and film performances, the most recent being as Lord Salisbury in The Crown. Clive Francis was first introduced to A Christmas Carol back in the late 90’s when he played Ebenezer Scrooge in a lavish production for the RSC, which he then went on to adapt into a one-man show.

In Clive’s words – ‘Once played, never forgotten. Once you have trod the “path of jagged flints and stones laid down by Scrooge’s brutal ignorance”, it’s hard to get the old boy out of your head’. Hence why he has decided to adapt the story into a show for himself.

Outreach at the Coronet offers subsidised tickets to local state schools and other organisations for a number of performances every year. This enables many people, who might not otherwise visit the Coronet, to participate in some of the fantastic theatre, music, poetry and art which we present. If you would like to support Outreach at the Coronet please contact jemma@the-print-room.org​