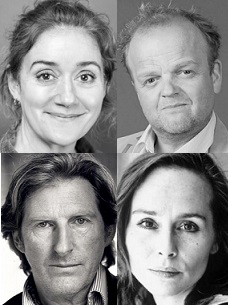 The most terrifying poems ever written.

Sylvia Plath, Edgar Allan Poe, E E Cummings, Browning, Keats, Auden and many, many more at their most disturbing. This evening of readings will take us from jet-black 17th Century revenge fantasies to Scottish murder ballads to the Gothic extremes of the Romantics to death-haunted French Symbolists and the psychological nightmares of the 20th century. There will be funny poems. But mainly there will be murder, torture, witchcraft, possession, abductions, madness, despair and horror. There will be blood.

For adults and courageous children.

Since 2012 Adrian Dunbar has been known to audiences as Superintendent Ted Hastings in the BBC One thriller Line of Duty. He has also appeared in such notable films as My Left Foot, The Crying Game, and The General. He co-wrote and starred in the 1991 film, Hear My Song, nominated for Best Original Screenplay at the BAFTA awards. His theatre credits, as director as well performer, include: King Lear, Pope’s Wedding, Saved and Up To The Sun And Down To The Centre (Royal Court); The Shaughraun and Exiles at (Abbey Theatre); Real Dreams and The Danton Affair (RSC).

Tara Fitzgerald has appeared in feature films, television, on radio and the stage. She has played Ophelia, Blanche DuBois, The Woman in White and Lady Macbeth. She won the New York Drama Desk Award for Outstanding Featured Actress in a Play in 1995 as Ophelia opposite Ralph Fiennes in Hamlet. She went on to star in Brassed Off, I Capture the Caste, and, released last year, Una. She appeared in the West End production of The Misanthrope with Damian Lewisand Keira Knightley, and in Henrik Ibsen’s A Doll’s House at the Donmar Warehouse. In recent years, Fitzgerald has appeared in more than 30 episodes of the BBC television series Waking the Dead and played the role of Selyse Baratheon in the HBO series Game of Thrones.

A star of stage and screen, a Golden Globe and Bafta nominee, Toby Jones made his breakthrough as Truman Capote in the biopic Infamous. Since then, his films have included The Mist, W., Frost/Nixon, Tinker Tailor Soldier Spy, The Hunger Games, Captain America, and Dad’s Army. He also provided the voice of Dobby in the Harry Potter films. Television credits include Capital, Sherlock and Titanic. Next year he will appear at the Harold Pinter Theatre in The Birthday Party.

Sophie Thompson was born in London and studied at the Bristol Old Vic Theatre School. Her Olivier nominated work on the stage includes Guys and Dolls, Clybourne Park, Company, Wildest Dreams and also Into the Woods which she won the Olivier for Best Actress in a Musical. On film she has appeared in Harry Potter and the Deathly Hallows, Gosford Park, Dancing at Lughnasa, Emma, Persuasion and Four Weddings and a Funeral. Her television work includes Jericho, That Day We Sang, Professor Branestawm, The Detectorists, A Room with a View, A Harlots Progress and Eastenders (for which she won Inside Soap Best Bitch Award). She is soon to appear in Rat Burger and Bounty Hunters. In 2014 Sophie won Celebrity MasterChef and is also the author of two children’s stories Zoo Boy and Zoo Boy and The Jewel Thieves as well as a cook book My Family Kitchen which are all published by Faber & Faber.

All proceeds to Safe Passage UK.

“Safe Passage works to ensure every person fleeing persecution can access a safe and legal route to a place where they can live a full and dignified life. We’re extremely grateful for the support of Dead Poets Live, every inch of which will go to supporting the most vulnerable unaccompanied minors to reach safety.”