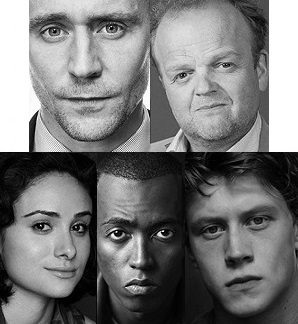 Adam Foulds is not a dead poet. He is, however, the author of one of the finest long verse narratives of the last quarter century. The Broken Word (winner of the 2008 Costa Poetry Award and the Somerset Maugham Award) is the story of a young man who returns to his family farm in Kenya before going up to Oxford and finds himself caught up in the Mau Mau rebellion – and in its brutal suppression. The poem addresses terror, violence and spiritual disgrace with a propulsive narrative economy that recalls Homer or classical drama, but it is also lyrical, domestic, touching and precise. It’s an overwhelming experience: compassionate, unsettling and a masterfully clear-eyed examination of our colonial legacy. Dead Poets Live’s setting is a response to the poem’s inherent drama, and a one-off theatrical event.

Toby Jones is one of Britain’s most distinguished and versatile actors. Among many notable credits: in cinema, he won the London Film Critics’ Circle Actor of the Year award for his portrayal of Truman Capote in Infamous and a BIFA award for his lead role in Berberian Sound Studio. On television, he was nominated for a BAFTA for his performance as Alfred Hitchcock in The Girl and has also been nominated for a BAFTA for his role in Detectorists. On stage, he most recently played Stanley opposite Zoe Wanamaker and Stephen Mangan in Ian Rickson’s revival of The Birthday Party.

George MacKay is best known for starring roles in, among other films, The Boys Are Back, Private Peaceful, How I Live Now, Sunshine on Leith, Pride, For Those In Peril, Captain Fantastic and Ophelia. He’s just returned from Australia, where he was playing Ned Kelly, in the film of Peter Carey’s True History of the Kelly Gang. He has featured on stage at the Old and Young Vic, in The Caretaker and Ah, Wilderness. Work for television includes series roles in The Outcast and 11.22.63.

Yasmin Paige has given outstanding performances on both film and TV, notably as the lead in Richard Ayoade’s Submarine and opposite Jesse Eisenberg in the same director’s The Double. She has starred in BBC Three’s Pramface and in Jack Thorne’s Glue.

Faaiz Mbelizi is of Kenyan and Tanzanian heritage and grew up in North West London. He was a member of three youth theatres; The Almeida Theatre, Lyric Hammersmith and The National Youth Theatre. Faaiz has just finished performing as Hakeem in ‘Free and Proud’ by multi award winning Em-Lou Productions at Edinburgh Fringe and the Kings Head in London. Other theatre credits include; ‘The Ostrich Boys’ at the Belgrade Theatre, ‘It Is So Ordered’ at the Pleasance Theatre, ‘Deadly Dialogues’ at Edinburgh Fringe and in New York and ‘Our lady of 121st’ at Rose Bruford College. Faaiz is a Spoken Word Poet and amateur photographer. One of his pictures was shown at the Tate late in 2017. He is currently writing his first short film and play.

Adam Foulds is the author of The Broken Word and also of four novels: The Truth about these Strange Times, the Booker-shortlisted The Quickening Maze, In the World’s Mouth, and the upcoming Dream Sequence.