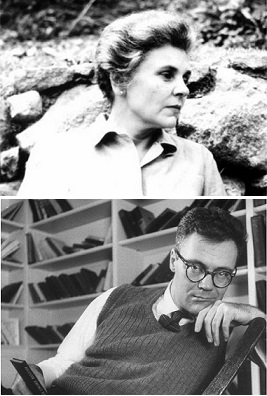 An Evening With Elizabeth Bishop and Robert Lowell

In the course of little over an hour, led almost entirely by Bishop and Lowell’s letters and poems, the evening will follow the relationship between these two mid-century American greats.

When they met in 1947, they met as fans, each on the cusp of literary fame. Drawn to each other as poets, their lives quickly became involved. Admiration blossomed into devoted friendship, and while it might have been something more, the friendship was to be a mainstay in the turbulence and heartbreak of their separate lives, a hilarious, candid and lifelong exchange of poems, books, ideas, feelings, observations, whims, gossip and jokes.

Twice winner of the Pulitzer Prize, Robert Lowell, whose centenary it is this year, ascended into public life on the immediate strength of his autobiographical poetry. Speaking for himself he also managed to speak for America, with poems such as ‘Skunk Hour’, ‘Waking in the Blue’, ‘For the Union Dead’ and ‘Waking Early Sunday Morning’. Elizabeth Bishop, also a Pulitzer Prize winner, was more retiring and reticent by nature. Her flair was for surface and detail – poems like ‘The Fish’, ‘The Armadillo’, ‘Sandpiper’ and ‘The Moose’ – powers of observation that contained and radiated feeling.

Dead Poets Live is devised and supported by the T. S. Eliot Foundation, a charity dedicated to literacy and the promotion of poetry. Proceeds from the evening will go to Safe Passage.

‘Safe Passage works to ensure every person fleeing persecution can access a safe and legal route to a place where they can live a full and dignified life. We’re extremely grateful for the support of Dead Poets Live, every inch of which will go to supporting the most vulnerable unaccompanied minors to reach safety.’