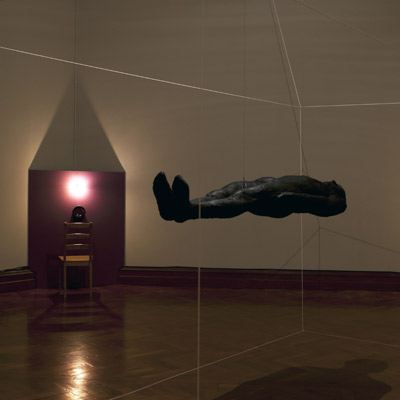 PART OF BECKETT IN LONDON: A festival of Beckett’s prose on stage featuring theatre, music and visual art.

Made especially for Dublin Contemporary 2011 where it was shown at the National Gallery of Ireland, ‘Hello, Sam’ is a multi-media work that attempts to engage the myth of Beckett’s persona, as well as the mystery of his work, by staging a situation which calls on the viewer’s imaginative participation and ‘willing suspension of disbelief’.

Circling around themes of death, resurrection, mourning and celebration, the complex multi-media work has as its main visual focus a suspended effigy, framed by a skeletal rectangle made of rope. The black effigy’s bog-like roughness introduces intimations of past time. At the corners of the enclosing rectangle, soaring lines search out the highest points of the room in which the figure is doubly enclosed. Above the figure, a single light-bulb illuminates the darkened room.

The work attempts to engage the myth of Beckett’s persona, as well as the mystery of his work, by staging a situation which calls on the viewer’s imaginative participation and ‘willing suspension of disbelief’.  Brian O’Doherty has reimagined ‘Hello, Sam’ in a work entitled ‘Hello, Sam’ Redux, 2016, to be shown on the Print Room’s main-stage and has included for the first time the voice of Jack MacGowran reciting Beckett’s Text For Nothing #8, in a recording included in O’Doherty’s seminal work Aspen 5+6 (1967).

Three stations, each marked by a low-light bulb, introduce the next phase of the work. Three chairs face the central effigy. The visitor, sits in the chair, on which a head-phone hangs. A spoken text is looped at each station. The speakers, two of whom knew Samuel Beckett subscribe to a single ‘conceit’: that Beckett is still alive and is on the other end of the phone. Thus the ‘Hello, Sam‘. We all, say the artists, speak to our dead, and in that way bring them to a version of suspended life. The speakers share experiences, touch the mystery of Beckett’s enigma, and in this way annotate and animate the anonymous horizontal figure.

2016 is the 110th anniversary of the birth of Samuel Beckett. It is also the 100th anniversary of the Easter Rising in Dublin which led to Irish Independence and this festival of Beckett’s work, supported by Culture Ireland, is part of ‘I Am Ireland’: a program of Irish culture in the UK to mark the centenary.