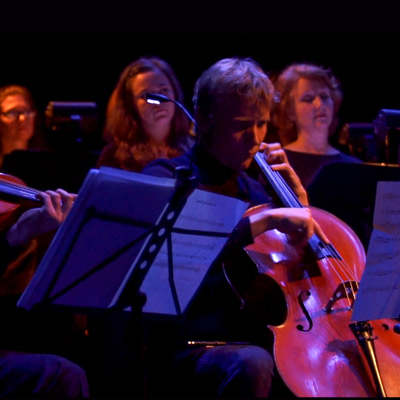 “You feel throughout that you’re being treated to an extraordinarily rich meal: the ensemble are clearly artists at the top of their game and the quality of performance in both music and theatre is exhilarating.”– Total Theatre Magazine.

Featuring music from the novel Watt and a selection of texts from across Beckett’s work, Here All Night was conceived by Judy Hegarty Lovett, Paul Clark, Conor Lovett and Caoimhin O’Raghallaigh as an exploration of Beckett’s use of music throughout his work.  The result is an evening of exquisite music and text that has been described as a virtuosic celebration where Beckett has become a collaborator.  Whether you know Beckett or don’t this is an extraordinary opportunity to encounter his work from another angle with a company who have spent over 20 years steeped in his work.

Internationally regarded among the foremost Beckett interpreters, Gare St Lazare have toured all over the world with their exquisite productions.  Featuring 5 prose pieces and their collaboration with London composer Paul Clark (Clod Ensemble) the festival will also have a number of £5 public conversations and ancillary events and will feature an installation by senior Irish artist Brian O’Doherty entitled ‘Hello Sam’.  2016 is the 110th anniversary of the birth of Samuel Beckett.  It is also the 100th anniversary of the Easter Rising in Dublin which led to Irish independence and this event, supported by Culture Ireland, is part of an international program of Irish cultural events to mark the centenary.