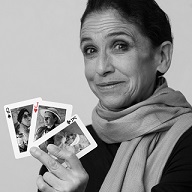 Out of Blixen is inspired by the life and writings of author Karen Blixen (aka Isak Dinesen) widely remembered through Meryl Streep’s portrayal in the Oscar winning film, Out of Africa, Blixen’s memoir of her time in Kenya. Few people know the complex woman behind the myth who wrote some of the most daring Danish fiction of the twentieth century.

With thanks to our Blixen season corporate sponsor ISS

Riotous Company Productions is supported by PRS for Music Foundation.

Out Of Blixen is sponsored by Workshop Coffee.