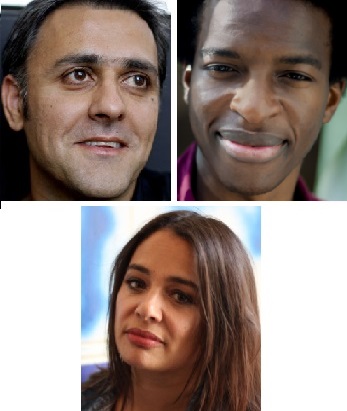 Daljit Nagra possesses one of the most distinctive voices in contemporary English poetry. British Museum is his third collection and marks a significant departure of style. His political edge has been honed in a series of meditations and reflections upon our heritage, our legacy, and the institutions that define them: the BBC, Hadrian’s Wall, the Sikh gurdwaras of our towns, the British Museum of the title poem. With compassion and charisma, Nagra explores the impact of the first wave of mass migration to our shores, the Arab Spring, the allure of extremism along with a series of personal poems about the pressures of growing up in a traditional community. British Museum is a book that asks profound questions of our ethics and responsibilities at a time of great challenge to our sense of national identity.

Daljit Nagra was born and raised in West London, then Sheffield. He currently lives in Harrow with his wife and daughters. In 2004 his poem ‘Look We Have Coming to Dover!’ won the Forward Prize for Best Individual Poem, and his first collection of the same name won the 2007 Forward Prize for Best First Collection, was shortlisted for the Costa Poetry Award and won the 2008 South Bank Show/Arts Council Decibel Award. Tippoo Sultan’s Incredible White-Man-Eating Tiger Toy-Machine!!! (2011) and the Ramayana (2013) were both shortlisted for the T. S. Eliot Prize. He teaches at Brunel University London and is currently Poet in Residence at BBC Radio 4 and 4 Extra.

“To anyone experiencing the sinking feeling that poetry in Britain is becoming depoliticised, Nagra’s work is a tonic.”- Sean O’Brien, Independent

Praise for the Ramayana:
“[A] rollicking, often rude and riveting version of an epic that is as much an instruction manual on how to live as a graphic adventure narrative of war.”- Independent

Kayo Chingonyi was born in Zambia in 1987, and moved to the UK at the age of six. He is the author of two pamphlets, Some Bright Elegance (Salt, 2012) and The Colour of James Brown’s Scream (Akashic, 2016). As well as being widely published in journals and readings from his work at venues and events around the world. He represented Zambia at Poetry Parnassus (a festival of world poets staged by the Southbank Centre as part of the Cultural Olympiad) and was awarded a Geoffrey Dearmer Prize as well as residencies from Kingston University, Cove Park, and Royal Holloway University of London in partnership with Counterpoints Arts. He was Associate Poet at the Institute of Contemporary Arts (ICA) from Autumn 2015 to Spring 2016.

He will read from his much anticipated debut collection, Kumukanda, meaning ‘initiation’, which marks the passing of Luvale, Chokwe, Luchazi, and Mbunda boys into adulthood. As part of these rites, boys live separately from their community as part of a bush camp in which they are taught various skills that will aid them in living a productive life. Makishi, a festival comprising dance, song and theatrical performance, marks the return of the initiated as men. Throughout Kumukanda and Makishi, masks are used to represent communion with the spirits as well as to teach important lessons. This book explores how one might approximate such rites of passage in the absence of one’s original culture.

Karen McCarthy Woolf is a writer, editor and critic, whose debut poetry collection An Aviary of Small Birds was selected as a Guardian/Observer Book of the Year, shortlisted for both the Forward and Fenton Aldeburgh prizes 2015 and described in The Poetry Review as ‘extraordinarily moving and technically flawless’. She reviews for and is published in numerous literary journals in the UK and US, including Modern Poetry in Translation, Prairie Schooner, The Poetry Review and Poetry London, where she is a trustee.

Karen was writer-in-residence at the National Maritime Museum in the summer of 2015, responding to an exhibit on migration. In the last year she has represented British writing at tours and festivals that have taken her to Mexico City, Singapore, the United States, Sweden and the Caribbean. She is the editor of four literary anthologies, most recently Ten: The New Wave (Bloodaxe: 2014) and Ten: The Next Generation (Bloodaxe: 2017). Her next collection Seasonal Disturbances explores the relationship between nature, the city and the sacred and is published by Carcanet in 2017.