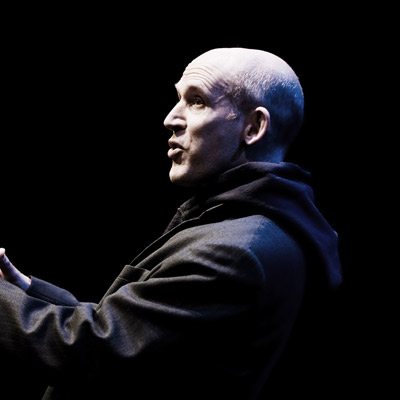 “A cold, hard jewel of a performance, a riveting experience which, if it ever comes your way, is worth dropping everything to encounter.” – The Irish Times.

Molloy is arguably Beckett’s great prose masterpiece and what he himself called ‘the important work’.  The bedridden Molloy is writing his ‘story’, which begins with him setting off to find his mother.  Along the way he is arrested for improperly resting astride his bicycle.  Upon his release he accidentally runs over a dog and helps its mistress with the burial.  One of Beckett’s most poignant and arresting characters.

The eponymous protagonist of Malone, also bedridden, attempts to tell himself stories as he nears his end.  The stories fail to take off until he finally hits upon what might be a true story which he’ll tell even if it kills him…

The Unnamable dispenses with stories altogether in what is one of the most profound and intense novels ever written.  Beginning ‘Where now?  Who now?  When now?’ it is an achingly beautiful exploration of what it is to own a human consciousness.  With trademark humour, anger and heartbreakingly sad its final phrase has become the Beckettian motto, ‘I must go on, I can’t go on, I’ll go on.’