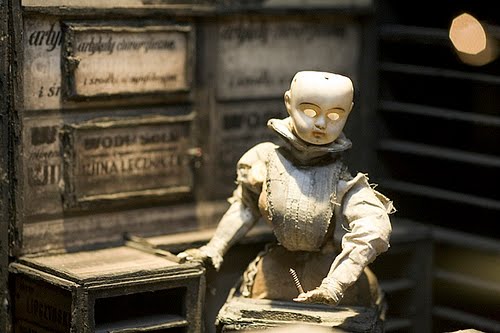 Step into the unique imagination of acclaimed Polish directors Teresa and Andrzej Welminski in this UK premiere of The Comet. Inspired by the life and work of one of the greats of Polish 20th-century literature, Bruno Schulz, The Comet is an impressionistic portrait of the remarkable author using his work The Comet and other stories as its basis.

As news spreads across town that a fatal comet is hurtling towards the earth, the townspeople enter into a festive mood, excited for the coming catastrophe. Only a newcomer to the town, Uncle Edward, is prepared to sound the alarm…

Bringing together vaudeville, physical comedy and surreal stagecraft in what is their first UK production since 1982 (with revolutionary theatre practitioner Tadeusz Kantor’s company Cricot 2), the Welminskis have created a production that demands to be experienced. It’s uproariously absurd – and disturbingly relevant.

In partnership with the 16th Kinoteka Polish Film Festival in London.

Performed in English and Polish with English surtitles.